Back to Analysis & Perspectives Home 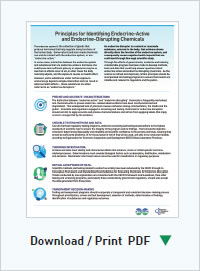 The endocrine system is the collection of glands that produce hormones that help regulate many functions of the human body. Some natural and man-made chemicals can and do interact with the endocrine system, or are “endocrine-active.”

In some cases, interaction between the endocrine system and substances that are endocrine-active is harmless: the substances lack sufficient potency or exposures may be so low that no effects occur at all; in other cases the body naturally adjusts, and the exposure causes no health effect.

However, some substances under certain exposure scenarios go beyond a simple interaction and can result in adverse health effects – these substances are often referred to as “endocrine disruptors.” An endocrine disruptor is a natural or manmade substance, external to the body, that evidence shows directly alters the function of the endocrine system, and consequently causes negative health impacts that are confirmed through thorough scientific study.

Through the efforts of governments, academia and industry, considerable progress has been made to develop methods, tests and data that could help answer questions about endocrine active and endocrine disrupting chemicals. As the science is refined and improved, certain principles should be incorporated into testing programs to ensure that results are reliable and relevant to regulators and the public:

PRECISE AND ACCURATE CHARACTERIZATIONS: The distinction between “endocrine active” and “endocrine disrupting” chemicals is frequently overlooked, and chemicals with no proven endocrine- related adverse effects have been mischaracterized and stigmatized. This widespread lack of precision causes confusion among commentators, the media and the public. Scientists and regulators engaged in screening and testing chemicals for endocrine disruption should commit to apply accurate and precise characterizations and refrain from applying labels that imply concern unsupported by the evidence.

CREDIBLE TESTING METHODS AND DATA: Like all chemical regulatory testing programs, endocrine screening and testing should adhere to the highest standards of scientific rigor to ensure the integrity of the program and its findings. There should be objective criteria for determining data quality and reliability and scientific confidence in the screens and tests, meaning they should be sufficiently predictive, fit for the purpose for which they will be used, and able to be conducted reliably, according to Organization for Economic Cooperation and Development (OECD) Good Laboratory Practices.

MUTUAL ACCEPTANCE OF DATA: Scientific methods and testing related to endocrine activity have been advanced by the OECD through its Conceptual Framework and Standardized Test Guidelines for Evaluating Chemicals for Endocrine Disruption. If tests conducted by one organization are consistent with the OECD Framework and Guidelines, then other testing and screening programs, particularly those conducted by government regulators, should also accept the data generated from those tests.

TRANSPARENT DECISION-MAKING: Testing and assessment programs should incorporate a transparent and consistent decision-making process throughout prioritization, screen and test development, selection of methods, determination of findings, identification of substances and regulatory outcomes.

EFFECTIVE AND EFFICIENT: Testing and assessment programs should be designed to maximize efficiency and reduce delays without compromising the quality of evaluations. A tiered testing approach allows investigators to best utilize existing information before investing time and resources into conducting additional screens and tests. However, when the data supports it, programs should allow for substances to skip initial screens and proceed directly to more thorough testing.

ADVANCED TECHNOLOGY: The latest technology should be employed to reduce the need for animal testing and improve effectiveness and timelines. For example, High Throughput Screening (HTS) tools can be used to prioritize and conduct certain screens on dozens of chemicals at once, instead of the labor and time intensive manual techniques traditionally used. As HTS continues to improve, it shows promise for reducing or even eliminating the need to conduct tests on animals. Moving forward, testing programs should remain agile enough to incorporate new technology as it is refined and even more appropriate screens and tests as their reliability is demonstrated.

CONSIDERATION OF REAL WORLD EXPOSURES: The testing strategies and decision-making frameworks used to identify adverse effects and potential risks of endocrine-active chemicals must consider whether, how and at what levels humans or the environment may be exposed to the substance. Exposure and hazard together determine the actual risk that is posed by the substance. Assessments and conclusions cannot be based on hazard characteristics alone.

WEIGHT OF THE EVIDENCE ANALYSIS: Conclusions must be made based on a Weight of the Evidence evaluation so all relevant evidence is considered including data from environmental releases, laboratory studies, and field studies and data related to biological and environmental effects. This approach ensures that the most credible, reliable studies have the greatest influence on findings; acknowledges that some tests and endpoints are more predictive than others; and allows researchers to assess data consistency so outlier studies do not skew conclusions.

PROTECTIVE APPROACH: Assessments should be comprehensive, risk-based and protective in nature. Screens should be as accurate as possible, but err on the side of indicating false positives for endocrine interaction. This will ensure that substances with weak or equivocal screening results are considered for more definitive testing. Tests should be highly sensitive and designed to specific effects, so outcomes are as accurate as possible by minimizing false positives and false negatives. To the extent possible, testing programs should address the most sensitive developmental lifestages. Tests should be broadly predictive across species, sex, and age, and test results should be relevant to assess potential human health and ecological effects.

SAFE LEVELS OF EXPOSURE: Through evidence-based analysis, it is possible to establish exposure levels at which endocrine-active chemicals do not cause adverse effects. The hypothesis that low levels of exposure can cause harmful effects that are not adequately captured by traditional toxicological studies is often discussed, but rigorous reviews by scientists at regulatory agencies have been unable to validate the hypothesis through reproducible, relevant testing. Therefore regulators have determined that the evidence does not support changing the way toxicological testing is done. When warranted by consensus in the scientific community, regulatory programs should have effective procedures to review and update testing methods on a regular basis to keep pace with scientific advances.